This is probably my favorite cornbread recipe ever because it is almost like eating cake. Because this is gluten-free it may be a bit more crumbly than you are used to but it tastes so good that you won't mind. Be sure to use a fine, blanched almond flour for this recipe; a coarser type more like almond meal won't give you the same result.

Preheat oven to 350. In a medium to large mixing bowl, stir together dry ingredients. In a separate small bowl or measuring cup, stir together flax and water and allow that to sit for a few minutes then add it to dry ingredients. Add remaining ingredients and stir until lumps are gone. Grease an 11x7 (or similar size) glass baking dish with vegan margarine/oil or spray it with cooking spray. Alternately, you can use muffin tins with liners (this makes about 12 muffins). Pour the batter in, ensuring it spreads evenly, and bake for 25 to 30 minutes or until done (edges will brown slightly and knife inserted in center will come out clean).

This is a hearty, flavorful soup with a slightly spicy, smoky kick to it. Sadly, as soup is not the most photogenic food, I don't have any decent photos to include.

In a large stock pot, heat oil over medium. Add pepper and onion and cook covered, stirring periodically, until the onions and peppers start to soften. Add the mushrooms, tomatoes, black-eyed peas, and broth before turning the heat up to high. Combine salt, pepper, and smoked paprika and stir them into the soup along with the potato flakes. Gently stir in the bay leaves and buttery spread. Once the soup reaches a boil, cover it again and turn the heat to low. Simmer until all the vegetables and the black-eyed peas are tender. Remove the bay leaves before serving.

Notes:
For the broth, my first choice is definitely vegan “chicken” broth. Both Better Than Bouillon and Edward & Sons make it, the former is paste while the latter is cubes. Make it with at least as much bouillon as the package says to use, possibly extra to suit your taste.
If you wish to substitute canned black-eyed peas for frozen, be aware that they will be softer; frozen works best in this recipe.
To lower the fat content, skip the oil and use the buttery spread to cook the onions and peppers instead of adding it later.
Do not use regular paprika in place of smoked paprika! The smoked paprika gives this soup a delightful smoky flavor that you won’t get from regular paprika.
This makes a lot of soup because I like to make enough to have leftover soup to last several people for days. If you want to make a smaller amount of soup, see the halved ingredients list below:

Last month the nice people at Vegan Cuts sent me one of their monthly subscription Snack Boxes for review. Needless to say, I was very excited about the idea of getting an assortment of vegan goodies to try & eagerly awaited the Snack Box's arrival. While I have never personally subscribed to a "monthly box" service like this, I know that one of the main concerns people have about them is whether or not the contents of the box will be things you'd actually want to try. To put it simply, the Vegan Cuts Snack Box did not disappoint!

Rather than listing what was in the box, here are some pictures from when I opened it: 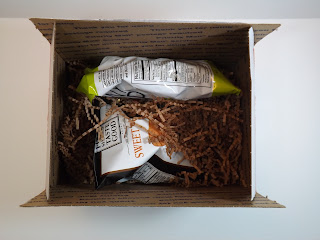 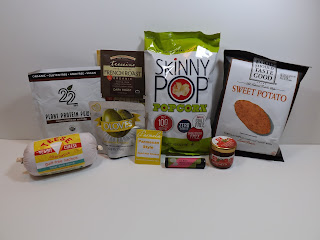 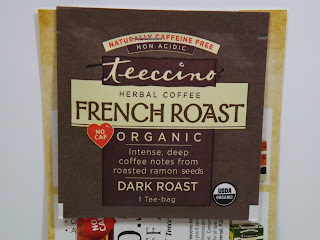 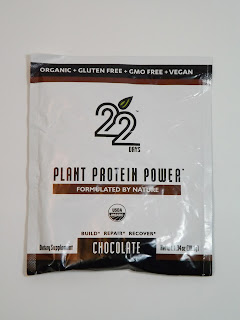 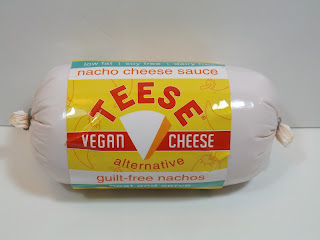 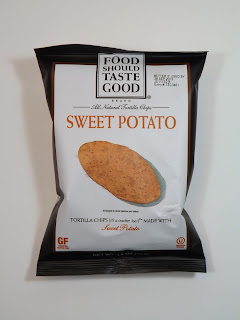 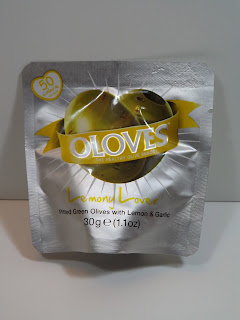 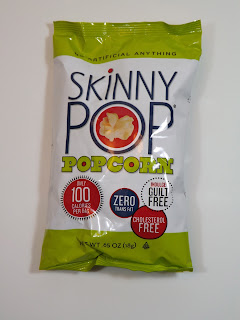 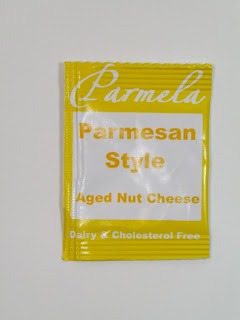 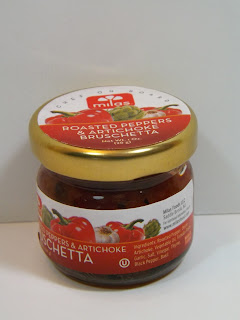 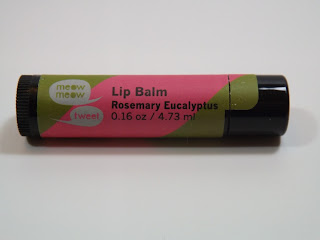 As you can see, there were a lot of vegan snacks to try! Almost all of them are things that I would have picked for myself to try if they happened to be on the shelf in a store where I buy groceries. Of course, having everything in the box be a surprise, like opening a care package from a a cool vegan friend, was pretty fun! Even though not everything in the box turned out to be my cup of tea, there were some things I ended up really liking a lot and would definitely look to buy in a full size package (the Oloves Lemony Lover and Food Should Taste Good Sweet Potato chips top that list). The best thing about the Vegan Cuts Snack Box was the opportunity to try a variety of vegan goodies that I would otherwise have probably never gotten to the chance to taste because they just aren't available in stores near where I live.

For the monthly fee of $19.95 you get a Snack Box containing 7 to 10 different vegan goodies, mostly gluten free, delivered to your door (no shipping charge in the US, $8 to Canada, $15 to elsewhere).

If you are interested in trying the Vegan Cuts Snack Box you can get information or subscribe here: http://vegancuts.com/subscription

***NOTE***
There are different products in the box each month. The box I received for review included Teeccino, 22 Days, Teese, Food Should Taste Good, Skinny Pop, Oloves, Parmela*, Milas, and Meow Meow Tweet* (plus a couple of coupons).

That's right -- you are 5 minutes and 3 ingredients away from vegan "Parmesan"! This isn't like the soy-based vegan parm that you can buy (like Galaxy Foods) which melts a bit and tastes almost exactly like the dairy version. It is totally different but totally delicious! I just call it parm because I use it in the same way: sprinkled on pasta or veggies; it even works really well as a breading in some recipes (sorry, not posted yet!). This vegan parmesan happens to be not only dairy free but also soy free and gluten free, plus it is made with walnuts (which have omegas) and nutritional yeast (which has b12 and other vitamins). 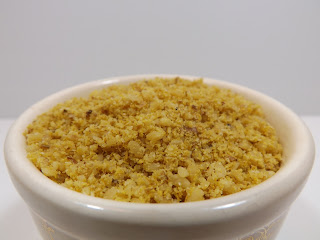 Combine all ingredients in your food processor and pulse until the walnuts are in small bits; you should be able to sprinkle the parm like crumbs. Check frequently to avoid turning it into a sort of nut butter. Yields about 2 1/8 to 2 1/4 cups. Store in an airtight container in your refrigerator. 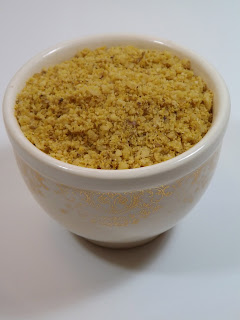 If you happen to buy the Nutritional Yeast that comes in a shake-top container (like Red Star), saving the containers to use with this works really well!

It is best to sprinkle this parm on top of food when you are ready to serve/eat it rather than putting it on before cooking or reheating food; it won't melt but the nutritional yeast will get kind of mushy if it sits on something moist.

* Loosely adapted from a recipe in The Starch Solution by John and Mary McDougall
Posted by The Vegan Kitchen at 3/09/2013 02:13:00 PM 2 comments: Links to this post 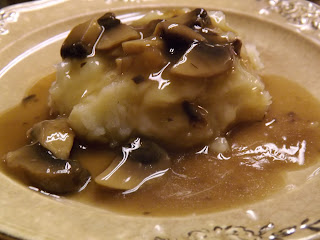 Wash the mushrooms, remove the stems, and cut them into pieces roughly the size of a nickel or quarter and 0.25" thick. In a saucepan, heat the water over high and add the bouillon cube, stirring to dissolve. When it boils, add the mushrooms, stir, cover with a tight fitting lid, and reduce the heat to medium or so. Allow the mushrooms to cook until they are quite tender, at least 15 minutes but probably longer (just check them periodically). Once they mushrooms are done, removed them from the pan and set aside. Return the pan to medium and a small whisk to stir in the corn starch. Keep whisking gently over medium heat until the liquid becomes somewhat translucent and thickens. Stir in the mushrooms, remove from heat, serve hot and enjoy!

* This makes the gravy salty so do not use this and serve with food that is already salty. If you want to use this gravy with salty food or are watching your sodium intake, try using only part of the cube or use a low-sodium bouillon or broth instead.

** This amount of corn starch gives you a thin gravy. For a thicker version, just increase the corn starch a bit. Other thickeners, like tapioca starch or arrowroot, will have different results so you may need to make adjustments for those.
Posted by The Vegan Kitchen at 2/19/2013 06:59:00 PM 1 comment: Links to this post

A while back, Muir Glen sent me some of their canned tomatoes. I'm not that big a fan of most canned tomatoes so it was a real surprise when I tried their Organic Fire Roasted Diced Tomatoes in a pot of chili and LOVED them! If you haven't tried them yet then you are missing out.

Muir Glen just contacted me again about a recipe contest featuring, you guessed it, their Fire Roasted tomatoes! I am happy to pass this info along to my readers so you can enter your best tomato soup or chili made with fire roasted tomatoes. 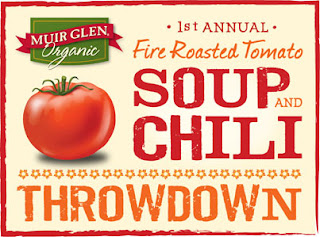 Take a peek at the nice prizes the winner gets: 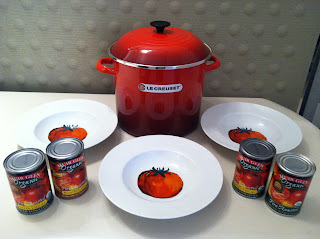 Not pictured: the title of "Muir Glen Soup and Chili Master" and an honorary plaque.

Here are the details:

"Are soup and chili your claim to fame? If so, we’re challenging you to put a twist on your tried and true recipes using Muir Glen Fire Roasted Tomatoes in our first annual Soup and Chili Throwdown. Get your creative juices flowing for a chance to win your own stash of soup and chili-worthy Muir Glen Organic Fire Roasted Tomatoes (recipient of the 2012 Bon Appétit Seal of Approval), a tomato red Le Creuset stock pot and a set of tomato serving bowls. Plus, the grand prize winner will walk away with the title of Muir Glen Soup and Chili Master and an honorary plaque, which will be yours to defend in next year’s Throwdown. Contest ends 2/28."

I would love to hear about your entries but make sure you actually visit that link to submit them.

Perhaps you have a winning tomato soup or chili recipe up your sleeve! Good luck!

These delicious pumpkin pancakes aren't quite as fluffy as my plain or banana pancakes because the pumpkin makes them dense. That being said, they taste amazing spread with vegan margarine and dripping with maple syrup! 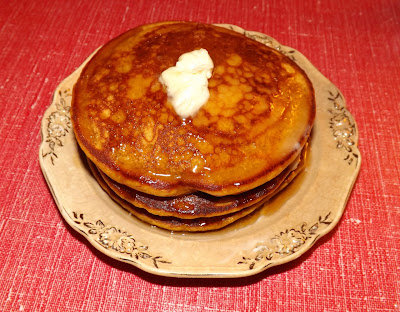 Combine the flour, baking powder, and spices in a large mixing bowl and stir. Add the agave and 1 1/4 cups of the nondairy milk, stir until the lumps are gone, and then stir in the pumpkin. Add the extra nondairy milk as needed to reach pancake batter consistency, probably about 1/4 cup or so depending on your how much liquid is in your pumpkin (you will need to add some but not necessarily all so do this slowly, stirring in a spoonful or two at a time). Add a little bit of vegan margarine or oil to a frying pan at slightly below medium heat. Pour the pancake batter into the pan to form 3-4" cakes. Flip the cakes when a few bubbles form on top and the bottom is light golden brown. Cook on the second side for just a moment and then enjoy topped with vegan margarine and grade B maple syrup!
Posted by The Vegan Kitchen at 11/18/2012 08:35:00 PM No comments: Links to this post

Vote For This Blog on Picket Fence Blogs